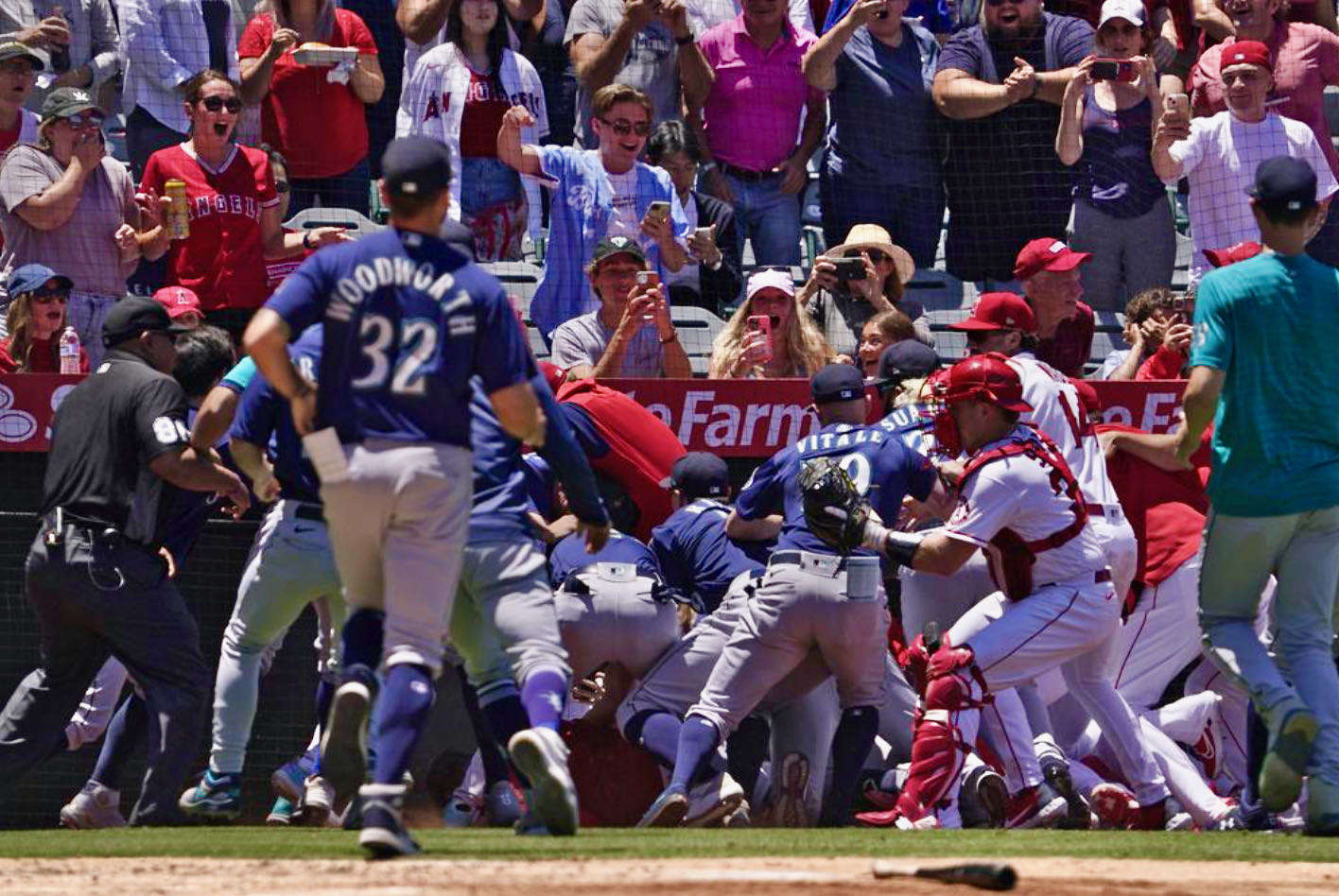 Several members of the Seattle Mariners and the Los Angeles Angels scuffle after the Mariners' Jesse Winker was hit by a pitch in the second inning, Sunday, June 26, in Anaheim, California. (AP/Mark J. Terrill)

ANAHEIM, Calif. (AP) — When the Angels made a late decision Sunday to go with little-used reliever Andrew Wantz as their opener on the mound, the Mariners suspected they might be about to get payback for a fastball that got awfully close to Mike Trout’s head the previous night.

The Halos insist that wasn’t their intent — and yet Wantz threw a pitch behind Julio Rodriguez’s head in the first inning and then hit Jesse Winker in the hip to start the second.

A wild, angry brawl ensued, resulting in the ejections of six players and both managers. The fracas will be remembered by both teams a whole lot longer than the Angels’ 2-1 victory over Seattle.

“That probably shouldn’t happen in the game, what happened out there today,” Seattle manager Scott Servais said. “Emotions running high, but it was pretty clear what was going on. They switched, put an opener in there to throw some balls at us. Got out of hand from there, and kind of a black eye.”

Both teams threw numerous punches in the melee that began when Winker charged the Angels’ emptying dugout after yelling at Angels interim manager Phil Nevin.

“Look, you play eight games in a matter of a week against the same team, things like this happen,” Nevin said after LA’s eighth game in 11 days against Seattle. “The scheduling, tensions, that’s baseball sometimes, unfortunately. There’s some ugly incidents once in a while. I think that’s just what happened today.”

The game was delayed about 18 minutes by the four minutes of mayhem. Along with both managers, the Angels lost Wantz, closer Raisel Iglesias and reliever Ryan Tepera, while the Mariners lost Winker, Rodriguez and J.P. Crawford — three of the first four hitters in their lineup.

“My only comment is it’s classless,” Seattle starter Marco Gonzales said. “To throw at Julio, who’s a kid, over something that happened last night when we were trying to win a ballgame in the ninth inning (and not) put the tying run on base, it’s just classless to come out and change your pitcher before the game. It’s clear. The intention is clear.”

Wantz’s pitch behind Rodriguez certainly appeared to be a response to Erik Swanson’s 95 mph fastball near Trout’s head in the ninth inning Saturday night, a throw that infuriated the three-time AL MVP. Wantz insisted that wasn’t the case.

“I was pretty amped up for my first start, and the first one just got away from me,” Wantz said. “It was sweaty. I was sweating. First day game I’ve pitched in (in the majors), and that’s that. Second one to Winker was a cut fastball inside and (I) just yanked it. That’s all I’ve got to say.”

Umpires issued warnings to both dugouts after Wantz’s pitch behind Rodriguez, but Winker and the Angels set it off an inning later, with both benches and bullpens emptying. Servais and Gonzales both felt the umpires erred by not ejecting Wantz immediately.

“I’m not aware of the incident with Trout from last night,” crew chief Adrian Johnson told a pool reporter. “You’re talking about the pitch that went over his head. That was nothing for us to issue warnings today. What happened today was a guy got hit. We had warnings in.”

Injured Angels star Anthony Rendon threw an open left hand to Winker’s face during the scuffle, notable because his right hand is in a cast: The Halos’ $245 million third baseman is already out for the year for the second straight season.

When Winker finally left the field, he made obscene gestures with both hands at the jeering Angels fans behind Seattle’s dugout.

“The only thing I’m going to apologize for is flipping the fans off,” Winker said. “That’s it. As fans, they’re spending their hard-earned money to come watch us play a game, and they didn’t deserve that, so I apologize to the fans, especially the women and children.”

After the field cleared, Iglesias returned a few moments later to throw large containers of sunflower seeds and gum onto the infield while screaming at the umpires, infuriated by his ejection.

The rest of the game went off without incident. Luis Rengifo homered and David MacKinnon drove in the tiebreaking run with a single in the seventh for the Angels, who avoided a series sweep with just their fourth win in their last 18 home games.

Gonzales (4-8) pitched five-hit ball into the seventh inning of a hard-luck loss for the left-hander and the Mariners, who finished 5-1 on an impressive road trip — although the finale was overshadowed by the fisticuffs.

Seattle scored the game’s first run in the sixth on the first homer in 22 games by Abraham Toro, who replaced Crawford atop the Mariners’ lineup.

Rengifo tied it in the seventh with a solo homer off Gonzales, somehow golfing a changeup well below the strike zone all the way over the fence in left-center for his third homer of the season.

Monte Harrison then drew a walk and scored on a two-out single off Andrés Muñoz by MacKinnon, who has driven in a run with each of his three career hits since reaching the majors last week.