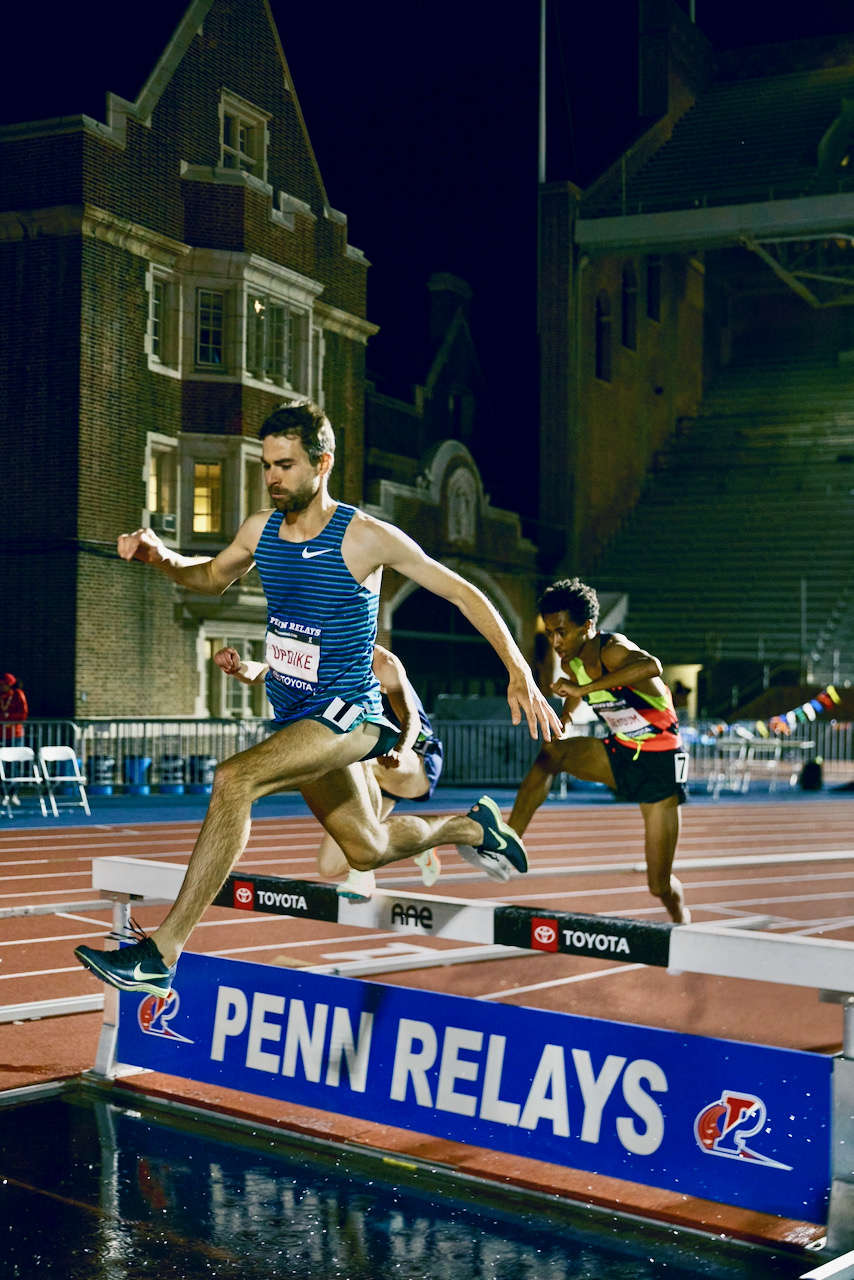 Isaac Updike is shown during his winning 3000 meter steeplechase at the Penn Relays in Philadelphia, April 29, 2022, on the University of Pennsylvania's Franklin Field. (photo courtesy Isaac Updike)

Juneau, Alaska (KINY) - Former Ketchikan High School athlete Isaac Updike, 30, a 2010 graduate of the Kayhi Kings, is racing Thursday in the 2022 Toyota USATF Outdoor Championships at Eugene, Oregon, and can qualify for July’s world championships at the same venue.

Updike will need to place in the top five of his preliminary heat of 14 runners or have one of the next four fastest times after the top 10 times in the two preliminary heats to qualify for Saturday’s finals.

“There are things called the big q and the little q,” Updike commented on his race heat. “And the big q is based off of place. So the top five place finishers in each heat get one of these big qs. So those top 10 people combined get automatically moved to the final. And then the next four fastest people between the two heats, it doesn’t matter what heat you are in, those next four fastest will also go to the final.”

If Updike, who is sponsored by Nike and trains with New York’s Empire Elite Track Club, places in the top three at Saturday’s finals, he will qualify for the 2022 World Athletics Championships Oregon22, July 15-24, also on the University of Oregon’s Hayward Field. World qualifiers have the honor of representing Team USA in the first world championships on U.S. soil. However, they must have the standard qualifying time of running under 8:22.00, even if they place in the top three on Saturday. Updike ran an 8:20.17 last July to win a Sound Running Sunset Tour event in California for the standard mark. Now he just needs to advance Thursday and Saturday by placing.

“I think there are eight or ten guys that are at USAs that have the world standard,” Updike said. “This may be one of the years where the final doesn’t go as fast until later in the race… because there are so many people that have the standard it may be more of a tactical race…”

“I had a pretty crazy winter,” Updike said. “Had a torn IT band that put me out for many months.”

The injury consisted of small tears in his IT band. He underwent a platelet-rich plasma injection to aid in healing but missed months of training up through late January.

“The tear is kind of like a rope fray,” Updike said. “Three or four long frays in the tendon… the PRP shot is platelet-rich plasma and they take your blood and put it in a centrifuge. So they spin it and add it to some other PRP concoction and they actually inject it into the local area… the idea is you are putting a bunch of mending materials, all the good healing properties in your blood get pumped into that one area…”

After rehab Updike placed first at the Penn Relays on April 29, hitting a season best time of 8:22.96 in the Olympic Development Men’s 3,000 meter Steeplechase Elite race. The time is a Penn Relays record and was the fastest American steeplechase time this season and third fastest in the world this season. That time has fallen now to the seventh fastest American time this year but Updike is within reach of his personal best of 8:17.74, run in last year’s Oregon Relays.

“Penn Relays was kind of the first real race that I had,” Updike said. “Obviously the winter was rough. I think all in all I probably had four months of no running from the middle of September to the middle of January… started running continuously sometime in the beginning of February and then started workouts in March…”

After the Penn Relays, Updike won the Princeton Elite Invitational 2,000 meter steeplechase in mid-May in a world best time of 5:25.01, but then placed third in the Trials of Miles NYC track meet 3,000 meter steeplechase with a time of 8:27.88, finishing behind Canada’s Jean-Simon Desgagnes (8:22.95) and Empire Elite Track Club teammate Travis Mahoney (8:24.89).

Unbeknownst to Updike, he had COVID-19 during those races.

“On paper it seems like a fine result for someone who has COVID,” he said. “But the way I felt and everything since then has been suboptimal… not to gloss over that but you can’t really control COVID… I’ve been dealing with it long enough that my mindset isn’t a poor me situation anymore, it is kind of like it is what it is.”

Even with all the setbacks Updike’s times are in the mix with about a dozen other top steeplechasers.

“The heat sheets have come out and I would say myself and my teammate (Mahoney), we’re in the first of two sections, and we’re in what we would say is probably the softer of the two fields,” Updike said. “So that helps. As being in the first section we won’t know in the moment a specific time. So it will be the top five athletes from the first section and the top five athletes from the second section… In the prelim with how I have been feeling with the fallout of getting COVID, I’m not worried about trying to win anything. I’m just trying to run to survive…”

Updike said most of the race day will be uneventful.

“With trying to sleep in,” he said. “My race is at 6 p.m. Pacific Time so it’s fairly late in the day. So you’ll have the ability to have a pretty big lunch and a pretty big breakfast and you’ll want to make sure you are fueling well within those meals… outside of that, it will definitely be a couple naps and maybe a shake-out run to calm the nerves…”