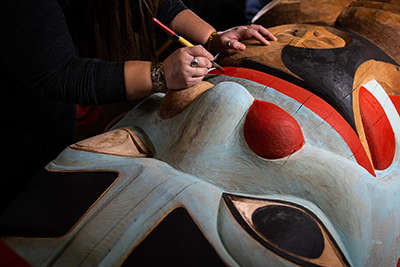 Juneau, Alaska (KINY) - Sealaska Heritage Institute (SHI) will hold a ceremony in April to celebrate the raising of ten totem poles along the Juneau waterfront and the installation of bronze masks on the SHI arts campus honoring the five major Native groups of Alaska.

The projects, Kootéeyaa Deiyí (Totem Pole Trail) and Faces of Alaska, have been years in the making and include work by master artists from Indigenous groups across the state.

“SHI continues its efforts to make Juneau the Northwest Coast arts capital, and I think people will be amazed to see these installations,” said SHI President Rosita Worl. “We can’t wait to unveil them to the public.”

The ceremony is scheduled April 22 at Heritage Plaza by the Sealaska Heritage Arts Campus on Seward St. The event will be live-streamed through SHI’s YouTube channel. The ceremony is open to everyone and the community is encouraged to attend.

The ceremony will mark the installation of the first 10 of 30 totems for Totem Pole Trail, an initiative launched in 2021 through a $2.9 million grant from the Mellon Foundation.

Through the grant, SHI hired 10 Tlingit, Haida, and Tsimshian artists, including TJ and Joe Young of Hydaburg, Jon Rowan of Klawock, David R. Boxley of Metlakatla, Nathan and Stephen Jackson of Saxman, Nicholas Galanin and Tommy Joseph of Sitka, Robert Mills of Kake and Mick Beasley of Juneau.

Haida artist Warren Peele was also hired to make a totem pole for the project in 2022 through a separate grant from the Denali Commission.

Peele’s pole will be among the first ten poles installed. Boxley’s pole is not yet completed and will be raised later.

The Mellon grant also funded apprentices to mentor each of the artists.

The totem poles will be an entry point from the waterfront to Heritage Square, a space encompassing the intersection of Seward and Front Streets and the surrounding area that was named by the city in 2018. Each totem pole will feature a corresponding storyboard that identifies the clan, crests, and information related to the artwork.

The ceremony will also mark the unveiling of Faces of Alaska, a spectacular monumental art installation at the Sealaska Heritage Arts Campus featuring bronze masks that represent Alaska’s five major Native groups, including the Inupiat, Yup’ik, Alutiiq, and Athabascan.  The fifth group will be a combination of the Southeast tribes, Tlingit, Haida, and Tsimshian because their cultures are very similar.

Master artists from each of Alaska’s five cultural groups were selected to create four-foot monumental bronze masks that are representative of their region’s artistic traditions.

The Faces of Alaska art pieces positioned on pedestals will provide visitors to the arts campus a centerpiece for discussion and education on Alaska’s different cultural groups. The installation will serve as a gateway to Alaska, introducing other regions and the diversity of the state’s Native cultures.