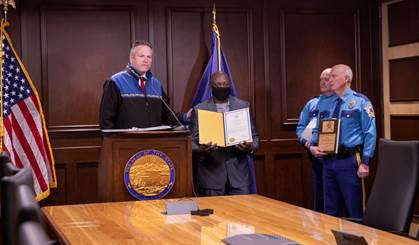 Juneau, Alaska (KINY) - A press conference was held by Governor Dunleavy Wednesday to give honors to individuals who had saved two Alaska children earlier in the year.

The first two awards went to Trooper Laura Reid and Kenai Dipnetter Antoine Aridou for saving a child who was swept up in the kenai river.

Trooper Reid had ran down to the river to save the child, but she began to float down the river as well.

That's when Aridou took notice of the situation and used his dipnet to assist the child and Trooper to safety. The child was evaluated by medics and reunited with his parents.

"There's times that folks just freeze they don't do the right thing, I mean we're people. At that moment, at that time, Trooper Reid jumping in the water save the boy, and Antoine on the bank reacting quickly and using the only tool he had, which was his dipnet, saved both of these folks, and we just want to recognize him for being an Alaskan in the right place at the right time and doing the right thing," said Dunleavy.

Another award was presented to Alaska Wildlife Trooper Jason Knier, who helped an 8-year-old child who fell into open water at the Skwentna River Checkpoint during the Iditarod.

According to Trooper dispatch, Trooper Knier and volunteer Doug Ramsey of Wyoming ran over to the scene and pulled the child out of the water. Trooper Knier pulled the boy from the river just as the current was tugging his legs under.

"If Trooper Kinnear had hesitated for even one second, the young boy would surely have been swept completely under the ice and drowned," Massie said. "His selfless actions helped him save a life that day and prevented a devastating loss to the victim's family." 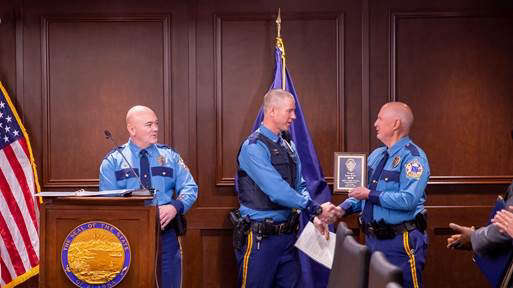