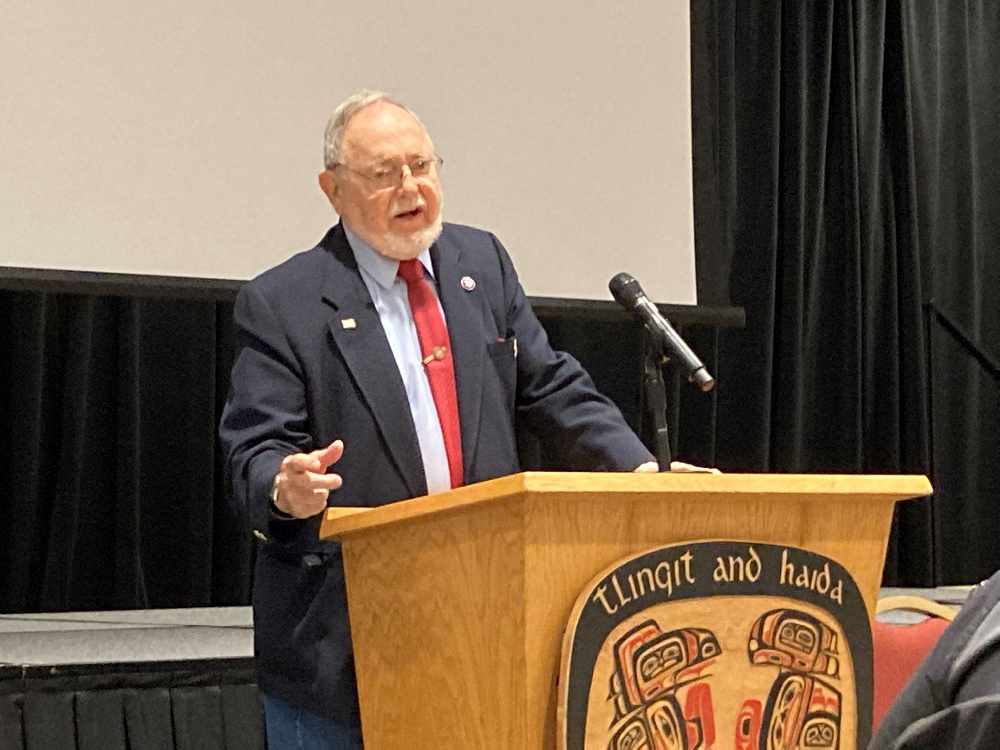 Alaska U. S. Congressman Don Young at the Elizabeth Peratrovich Hall during the Juneau Chamber of Commerce luncheon.

Juneau, Alaska (KINY) - Alaska Congressman Don Young talked about the passage of the Alaska Tourism Restoration Act, economic diversification, and the possibilities of energy production in Alaska while at the Juneau Chamber of Commerce's weekly luncheon.

Congressman Young began talking about the passage of the Alaska Tourism Restoration Act, and said it was an interesting battle, with as he put it "two fronts were attacking us." The two he pointed out were the Centers of Disease Control and Prevention's restrictions as well as Canada's actions around the Jones Act, which prohibits ships of non-US registration to travel from one American port directly to another.

Young pointed out that the Senate version of the act was not found to be germane since there was a tax provision within the bill which he said was against the rules since the Senate cannot create monies. In discussion with congressional leadership, he said that they agreed to use his bill in the House and for it to be sent to the Senate.

When Young talked about the President signing the bill he had said that President Trump signed the bill, but corrected himself and said President Biden signed it, remarking "Listen I've been with ten presidents, part of it gets mixed up."

On the whole of the process of passing the act, Young commented "We hope it will be the beginning of the end of this constant battle between Nations and a Federal Agency, not recognizing the importance of the tourist industry in this state."

Young is already considering the future and thought of an idea to prevent a situation like this from happening again. He posed the idea during the speech that the foreign port for ships to travel to get to Alaska could be the island of Metlakatla, the only Indian Reserve in the State. "We will avoid Canada, period." He said for folks in Metlakatla however, not to get excited since he thinks it'll take a while to happen.

Young said he had a meeting with investors, and they talked about coming to Alaska about energy and power in Alaska. He said that the state ought to have power from what is available in the state. Geothermal, Hydro, and Wind were mentioned, saying that the state is not using them correctly. With the means like hydropower, he said "There shouldn't be a community in Southeast burning diesel fuel."

Young wanted to make the Chamber aware that in the last 14 months, the nation spent more money than in World War Two total. Citing that 4 trillion was spent in the war noting that the number is in "cheap dollars", but said that it was exceeded by approximately 14 trillion dollars. He warned that inflation is hitting sooner than some expected. He called for a sound power base of economic strength and to stop spending more than the nation has, rather it should be spending when the nation produces more.

At the close of his speech, he highlighted the strengths of Alaska's resources, saying that "everything you need to have is here," and added that "It's gonna be your job, and the future of this great state to make sure it's developed for the good of man, not stagnating for the good of man, but developed."

Meanwhile, this luncheon was the first to be held in person by the Chamber since the beginning of the COVID pandemic. Juneau Chamber President Eric Forst was asked what it is like to be in person again, He said it was really refreshing and that it was great to welcome everybody and shake their hand. He called it "a nice return to normal."